In the first part of this post we looked at right now how a massive shift in the lexicon of language and emotion description has occurred. This is especially important for young people in their teens. You should read the first part of this post for a greater understanding of the problem. Which is, in a nutshell, that fragrance descriptions are currently depended on highly sophisticated language which is not accessible. In order to communicate quickly, effectively and especially engagingly we must think unlike bygone times.

Inspired by football. A classic example of using pre-existing cultural symbols. A lesson in semiotics was in the development of the red card system of football matches. Yellow is a booking. Red means you are off for an early shower.

The idea of using language-neutral coloured cards to communicate a referee’s intentions originated in football, with English referee Ken Aston. After the 1966 quarter-finals between Argentina, newspaper reports stated that the German referee Rudolf Kreitlein had booked Bobby and Jack Charlton, and sent off Argentinian Antonio Rattan. Though all of this was oblivious to all those that were playing as communication had not occurred. Players, spectators and journalists where bewildered. The referee had not made his decisions clear during the game.

This incident started the referee Ken Aston thinking about ways to make a referee’s decisions clearer to both players and spectators. For Ken Aston, his question was how could you play the World Cup between different countries when the referee couldn’t make himself understood to the players?

“While I was driving the light turned red and I thought, ‘Yellow, calm down and red, stop, go out.’”

Aston realised that a colour-coding scheme based on the same principle as used on traffic lights?.  (yellow – stop if safe to do so, red – stop) would transcend language barriers and make it clear that a player had been cautioned or expelled. As a result, yellow cards to indicate a caution and red cards to indicate an expulsion were used. As Dave Trott said “That is real semiotics: communication without words.”  [6]

Solution…We have the best cultural lexicon at our teen’s fingertips—emojis! I have used one emoji for the aroma (Smells – Left) and an accompanying emoji for emotion (Feels – Right).

Can you decode this one?

This is Fahrenheit by Christian Dior:

“An odd, wild, Petrol masculine start gives way to a then comforting floral quirky, feminine accord. With green chypres, wrapped with prominent leather and woods the final ending reminds of the great outdoors.”

Via the use of an Aroma Signature. It is created by decoding the emotions and aromas consumers find, then I wrote a fragrance description. Then I locate the one key emotion and the aroma that drives this emotions.

Applications beyond Marketing…This format is ideal for training retail duty free sales staff who quickly have to come to terms with thousands of fragrances, you could provide them with as summaries of the key accords, rewards and Need States in this format. Moreover, I also suggest that emojis make interesting puzzles for consumers to decode for advertising.

What do you think? I would like to hear your views below…

Fragrance Descriptions for Teens...Good, Better and Best (part 1 of 2)

I am thankful that, when I was a child, my father encourages me to read the complicated ingredients on the packaging of a product. This had the threefold benefit of: Not being afraid of chemical sounding names Demystify scientific-sounding terms (what is Aqua anyhow? ) … 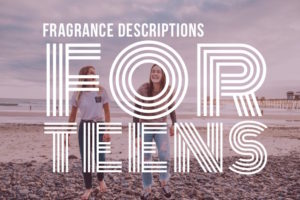 Fragrance Descriptions for Teens…Good, Better and Best (part 2 of 2)

Fragrance Descriptions for Teens…Good, Better and Best (part 1 of 2)